Born in Sydney in 1892, Helen was the daughter of Dr. Henry Ernest and Ida (Burchell) Kendall. Her youth was spent in Cape Breton, but she moved to Montreal to study surgical nursing at the prestigious Royal Victoria Hospital.

After her graduation in December 1916, Helen enlisted with the Canadian Army Medical Corps (CAMC) in Halifax and went to England, where she began her career as a nursing sister and anaesthetist in early 1917.

A Life In Photographs

Explore the photograph gallery below to learn more about Helen’s life and military service.

Helen and brother Ernest James Kendall, ca. 1902. Helen was born into Sydney's professional class. Her father (Henry Ernest Kendall) was a doctor and was later appointed Lieutenant Governor of Nova Scotia, and her mother Ida was the daughter of George Burchell and Louisa Lorway, both members of prosperous professional families in Sydney. (Beaton Institute, Cape Breton University, Reference number: 97-256-28094) 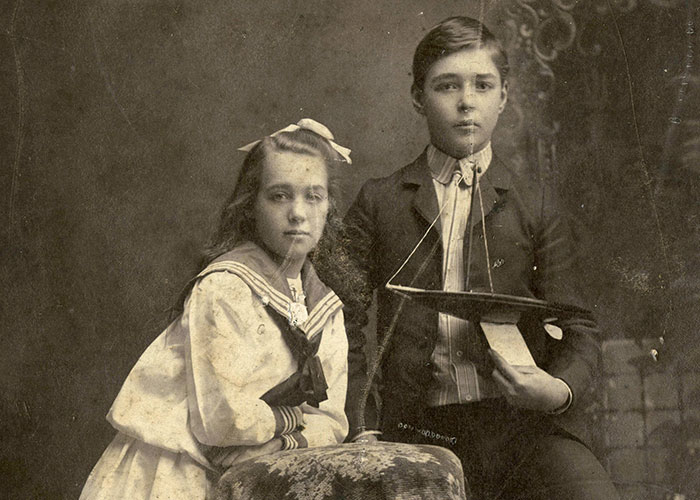 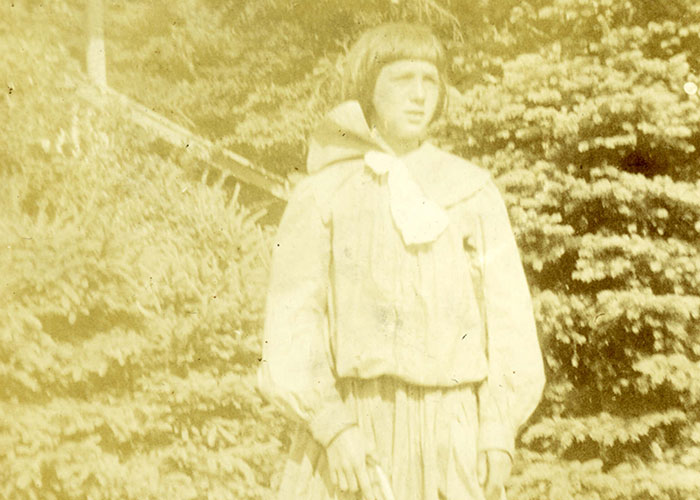 Petersfield, ca. 1912. Following her mother's death in 1909, Helen's father married Margaret McLennan in 1913. Margaret was the daughter of prominent businessman and politician John Stewart "J.S." McLennan of Montreal and later Petersfield in Westmount, near Sydney. Helen spent much of her youth at Petersfield, and maintained a lifelong friendship with J.S. McLennan's daughter, Katharine. Hugh McLennan, Katharine's older brother and friend of Helen Kendall, was killed in action at Ypres, Belgium in April 1915. His death came early into the war, and had a tremendous impact on the McLennan family. Bartlett McLennan, brother of J.S. and uncle to Hugh and Katharine, enlisted in the Canadian Expeditionary Force only a few weeks following Hugh's death, and was killed in action on August 3, 1918 at the battle of Amiens. Katharine also felt compelled to serve and went overseas in 1916 to volunteer as a nursing aid. J.S. McLennan also served as president of the Cape Breton branch of the Canadian Patriotic Fund. (Beaton Institute, Cape Breton University, Reference number: 91-575-22536) 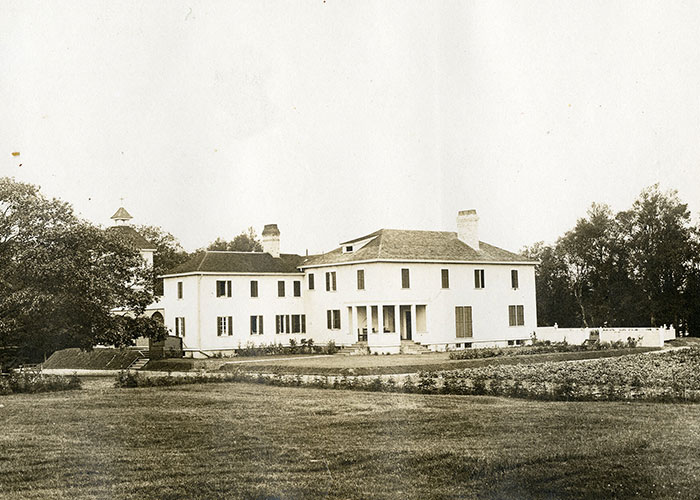 Helen Kendall, ca. 1919. A reported 2,504 Canadian nursing sisters served overseas during the First World War. Another 447 served in military hospitals in Canada, and 190 served in Queen Alexandra's Imperial Military Nursing Service in Britain. Other women who were not trained nurses volunteered with the Voluntary Aid Detachment, the Red Cross, and other organizations. (Beaton Institute, Cape Breton University, Reference number: 97-550-28398b) 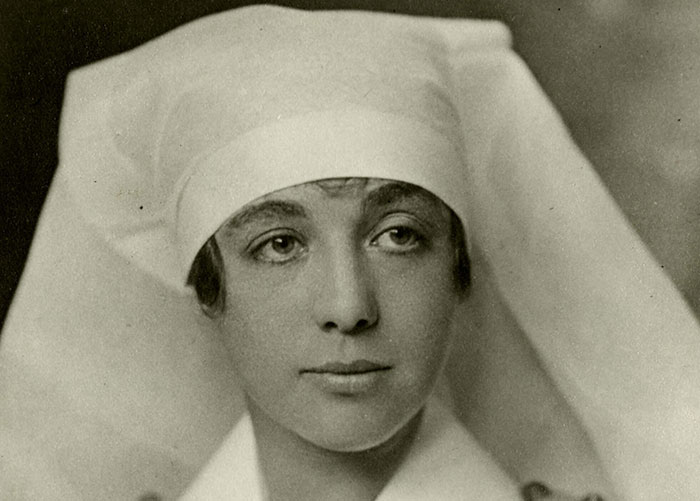 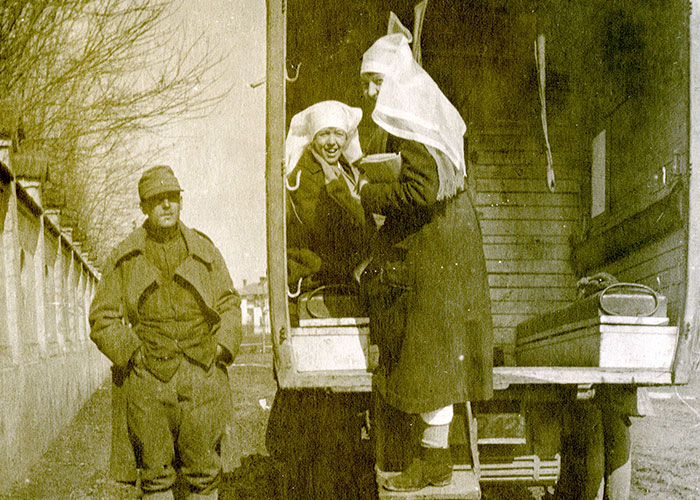 Nursing Staff of the Canadian Forestry Corps Hospital at Lajoux, Jura, France, 1918. In December 1917, Helen (pictured at centre) was one of five nurses sent to staff the Canadian Forestry Corps (CFC) Hospital at Lajoux in Jura, France. She worked in the same location as No. 2 Construction Company of the Canadian Expeditionary Force, also known as the Canada's Black Battalion. This company was Canada's first and only segregated, non-combatant, all-black military unit and was stationed with the CFC at Lajoux. Several men from Sydney, Glace Bay, and New Waterford served in this unit, and it is likely that Helen treated many African Nova Scotians in a segregated ward of the CFC hospital. (Beaton Institute, Cape Breton University, Reference number: 97-558-28406b) 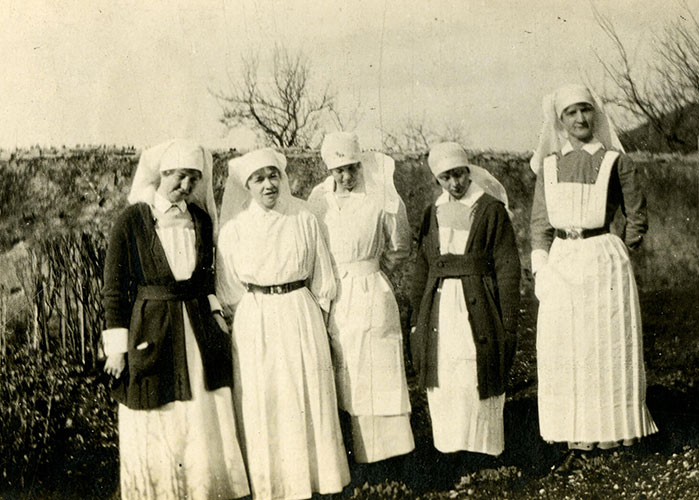 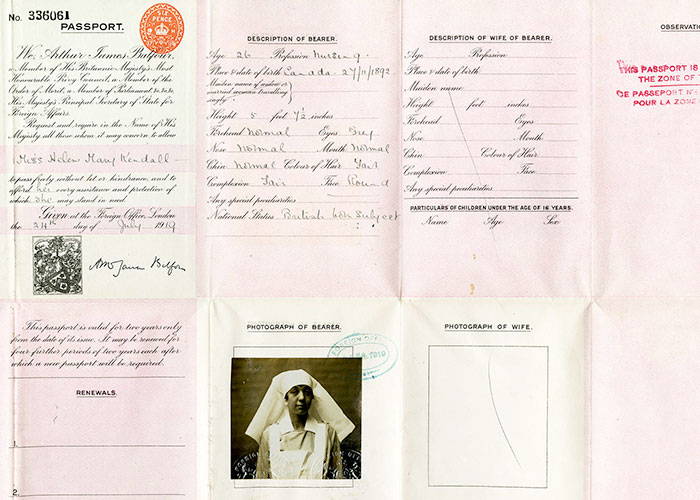 Nursing Sisters at the Royal Victoria Hospital in Montreal, ca. 1920. Helen (pictured at far left) was part of a group of nursing sisters from the Royal Victoria Hospital who, under the leadership of Dorothy Cotton, went to Romania to establish a nursing school in Bucharest in 1920. (Beaton Institute, Cape Breton University, Reference number: 97-552-28400) View Full Screen Image 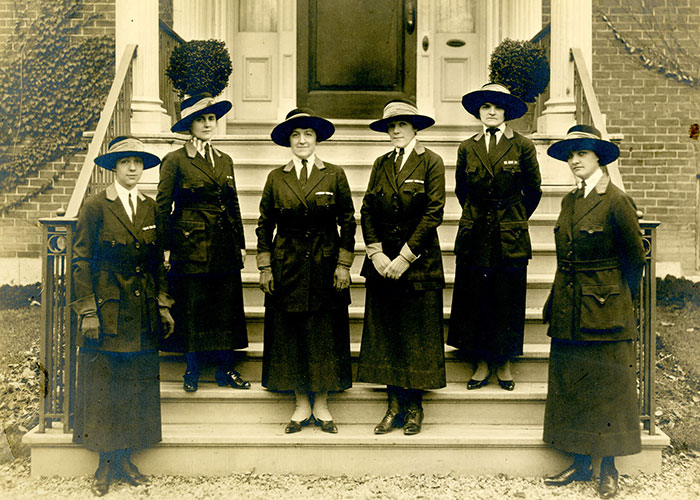 No. 1 Neurological Nursing Hospital, ca. 1940. Helen (pictured in the front row, fourth from the left) was one of 13 nurses who had worked under the direction of neurologist Dr. Wilder Penfield at the Montreal Neurological Institute and volunteered for service overseas at the outbreak of the Second World War. Read Full Caption... View Full Screen Image

No. 1 Neurological Nursing Hospital, ca. 1940. Helen (pictured in the front row, fourth from the left) was one of 13 nurses who had worked under the direction of neurologist Dr. Wilder Penfield at the Montreal Neurological Institute and volunteered for service overseas at the outbreak of the Second World War. She worked at No. 1 Neurological Hospital, a 200-bed unit established at Basingstoke, Hampshire, England in September 1940, where she helped treat casualties with head wounds. (Beaton Institute, Cape Breton University, Reference number: 97-553-28401) 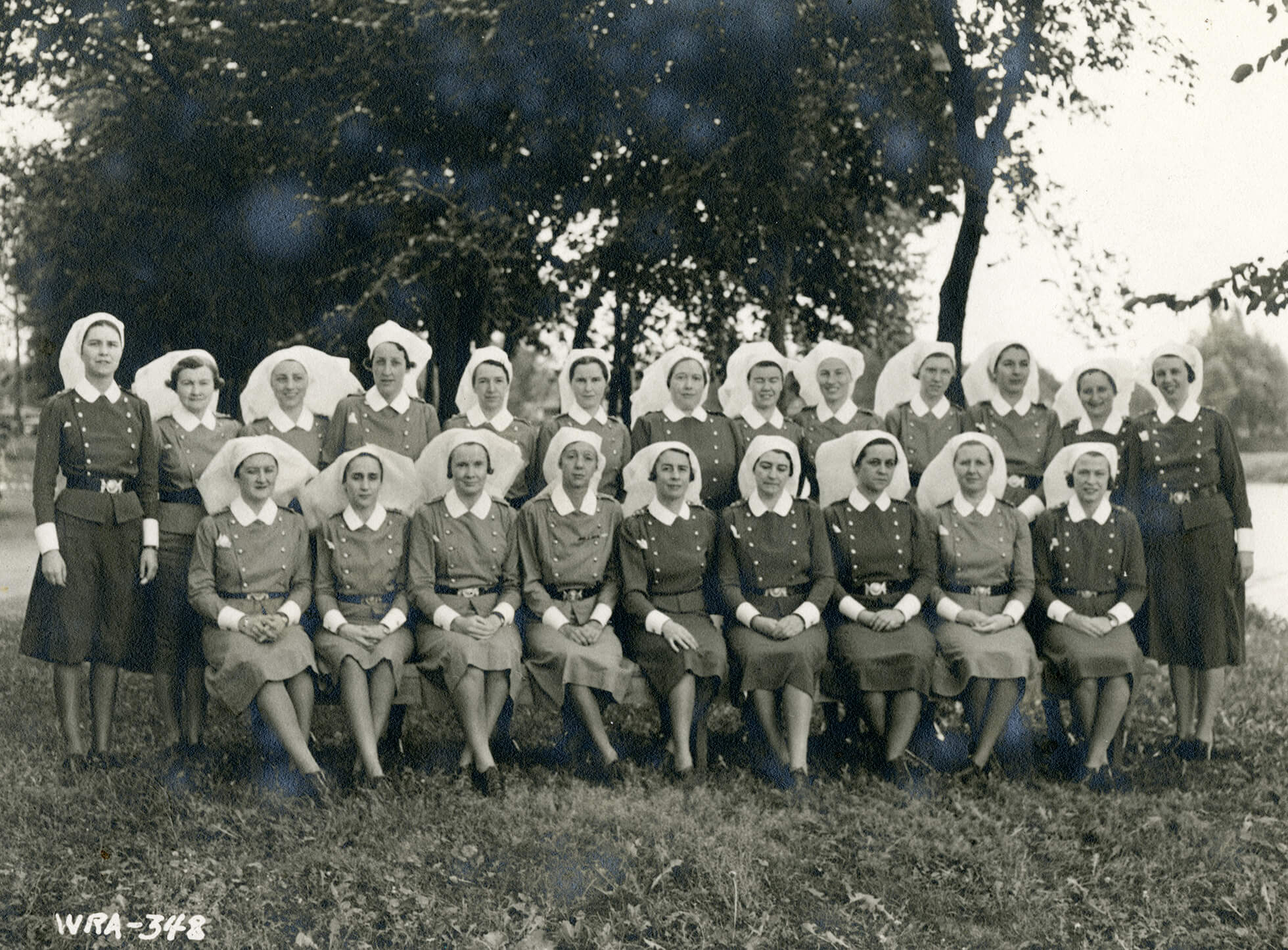 Helen Kendall and Katharine McLennan, 1973. One of Helen's closest friends was Katharine McLennan of Petersfield. The Kendall and McLennan families were longtime acquaintances and Helen and Katharine were friends since childhood. Katharine's sister Margaret married Helen's father in 1913, but their friendship remained unchanged. Katharine served overseas as a nursing aid with the French organization Secours aux Blessés Militaires from 1916-1919, and kept in regular contact with Helen as she served with the Canadian Army Medical Corps in England and France. (Beaton Institute, Cape Breton University, Reference number: 97-560-28408) 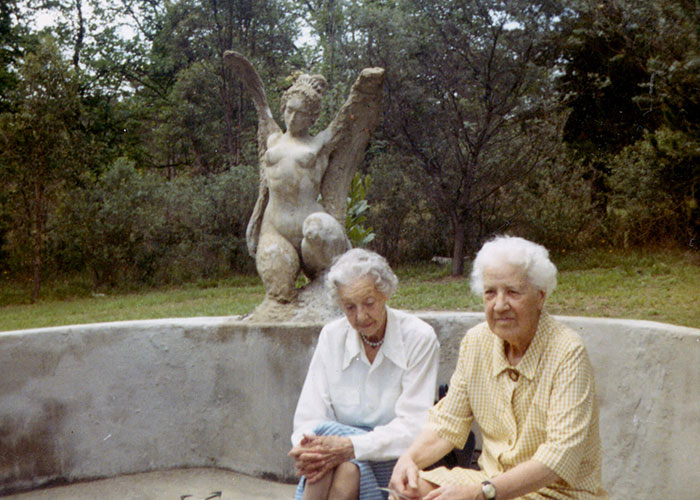 Experience Helen's story through illustrations of her life and work. 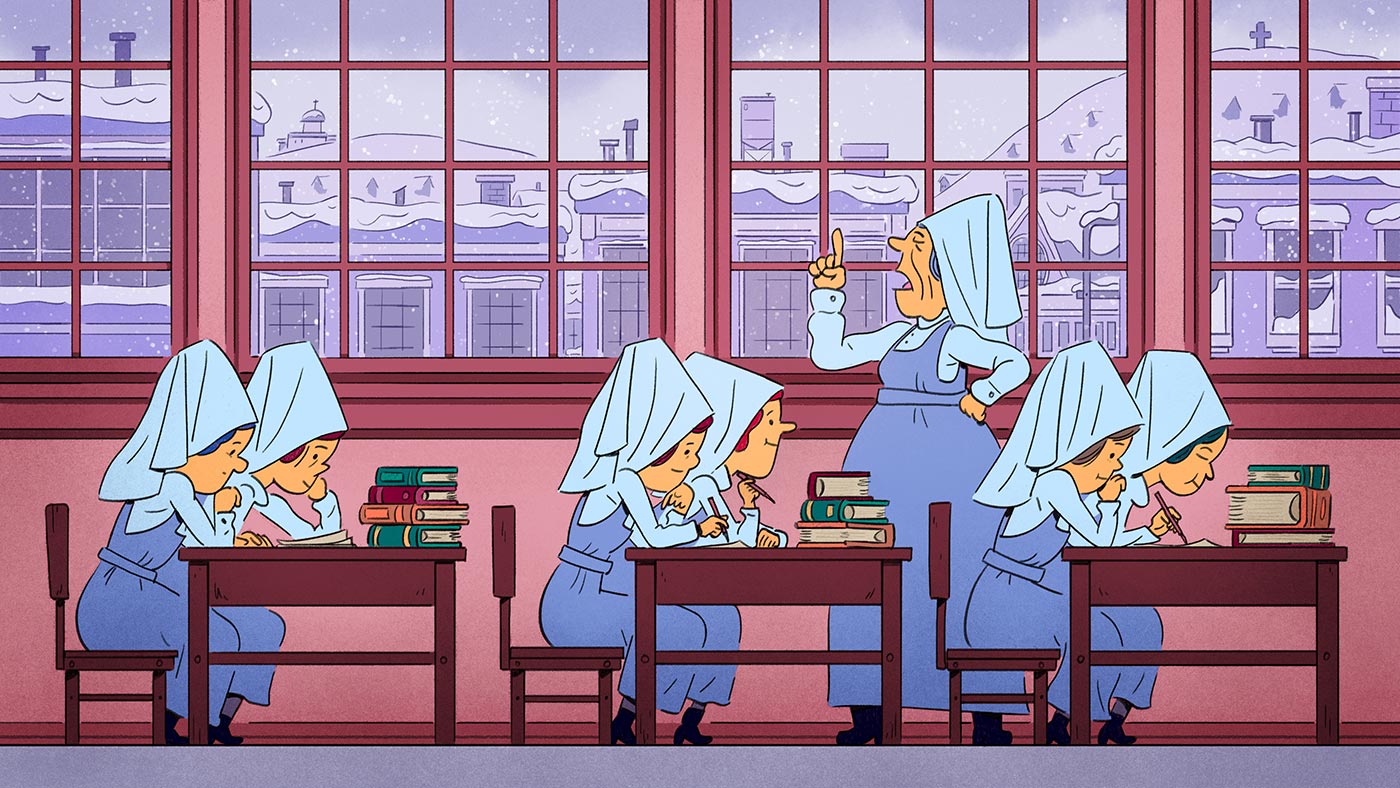 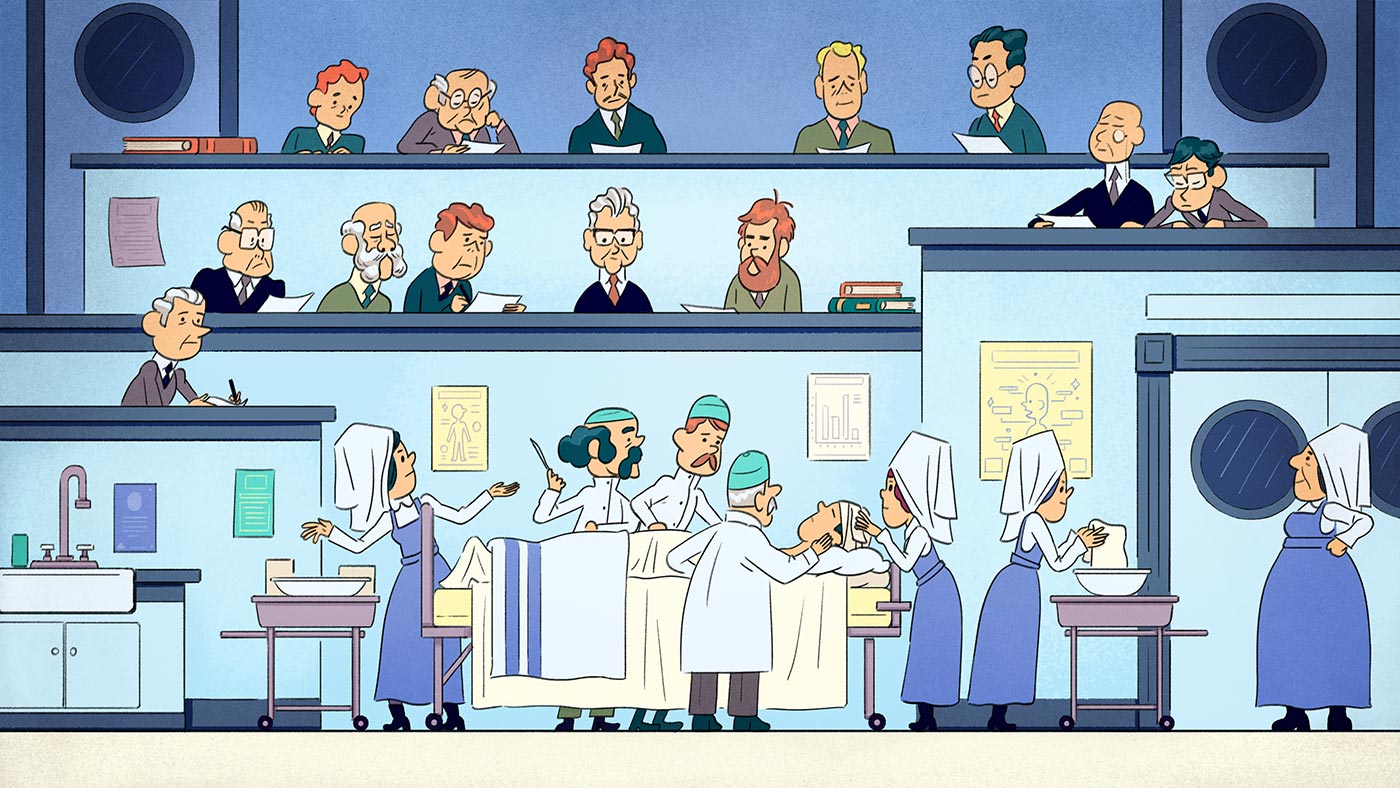 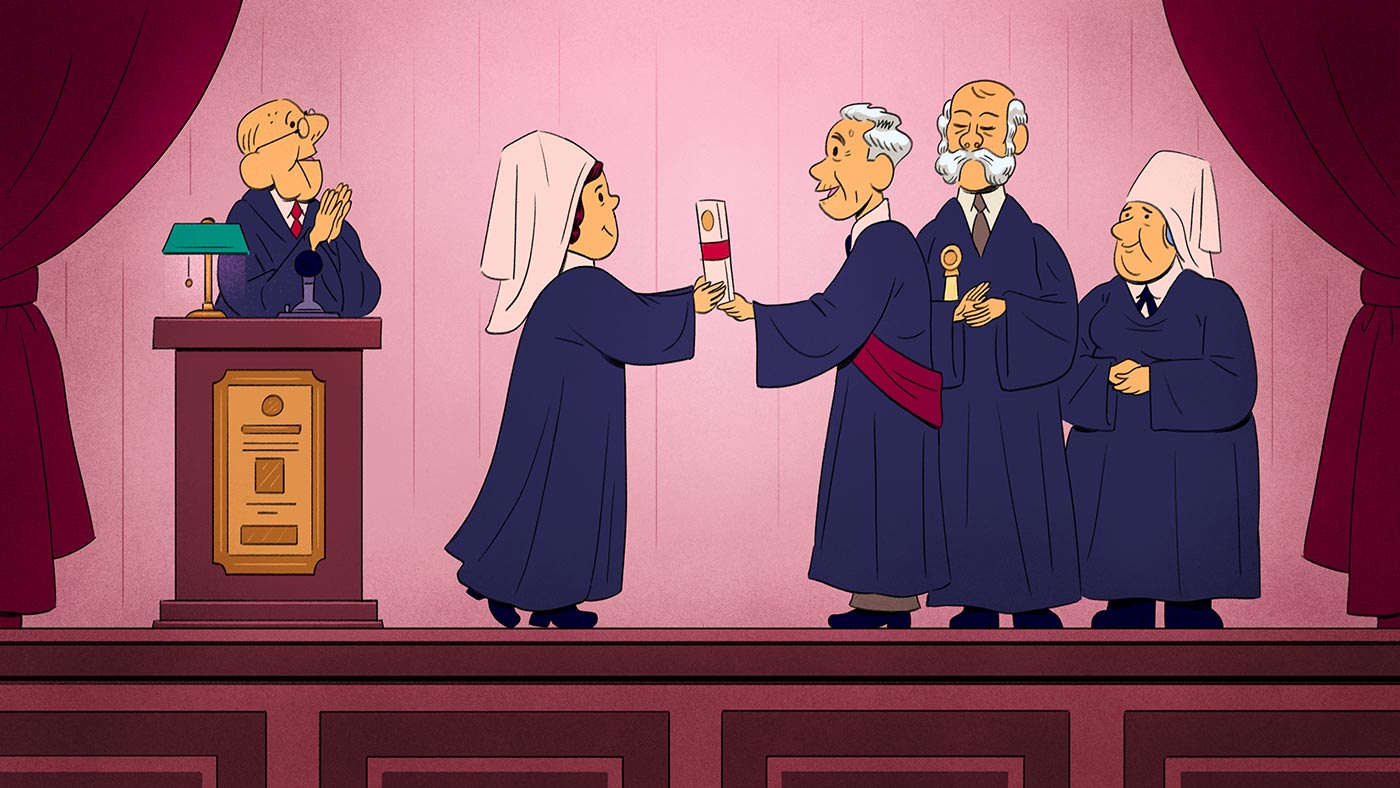 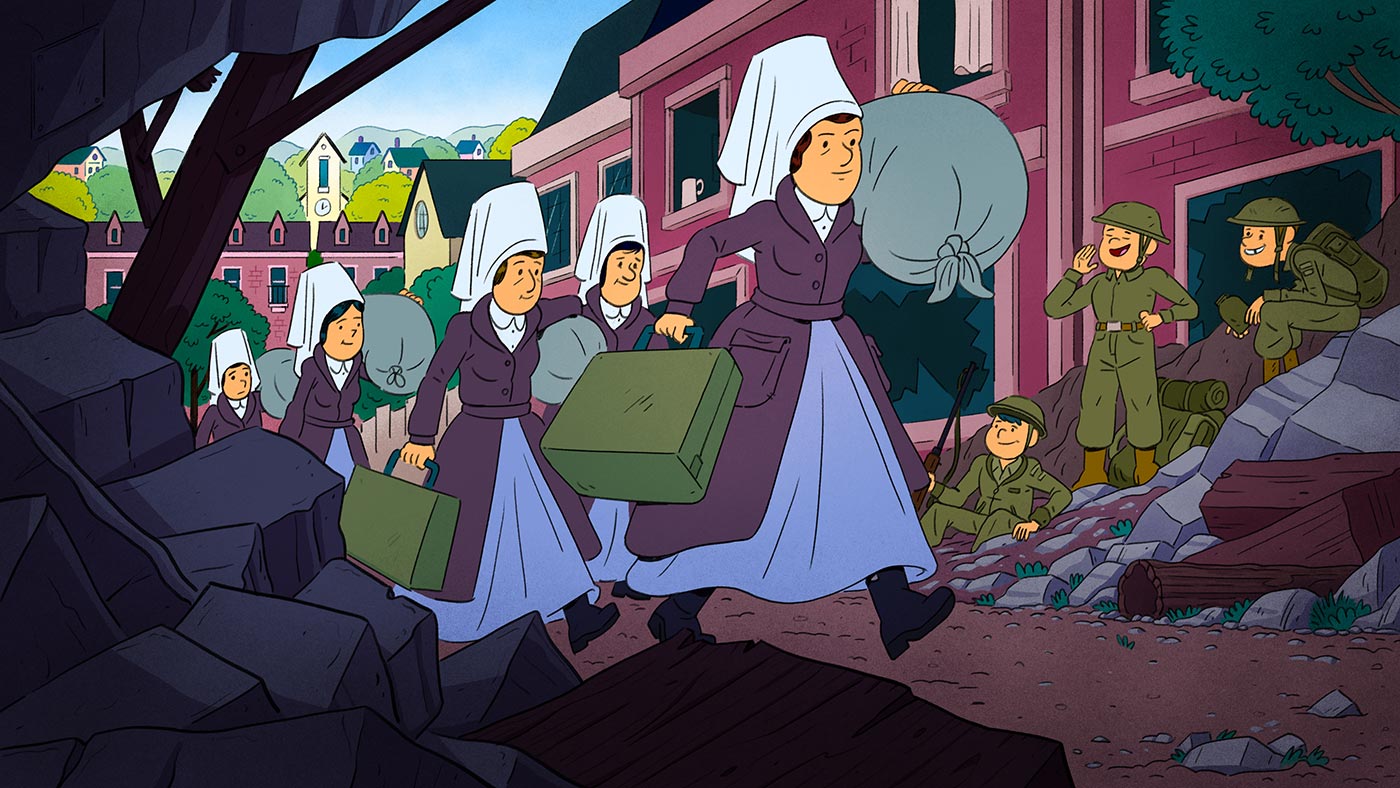 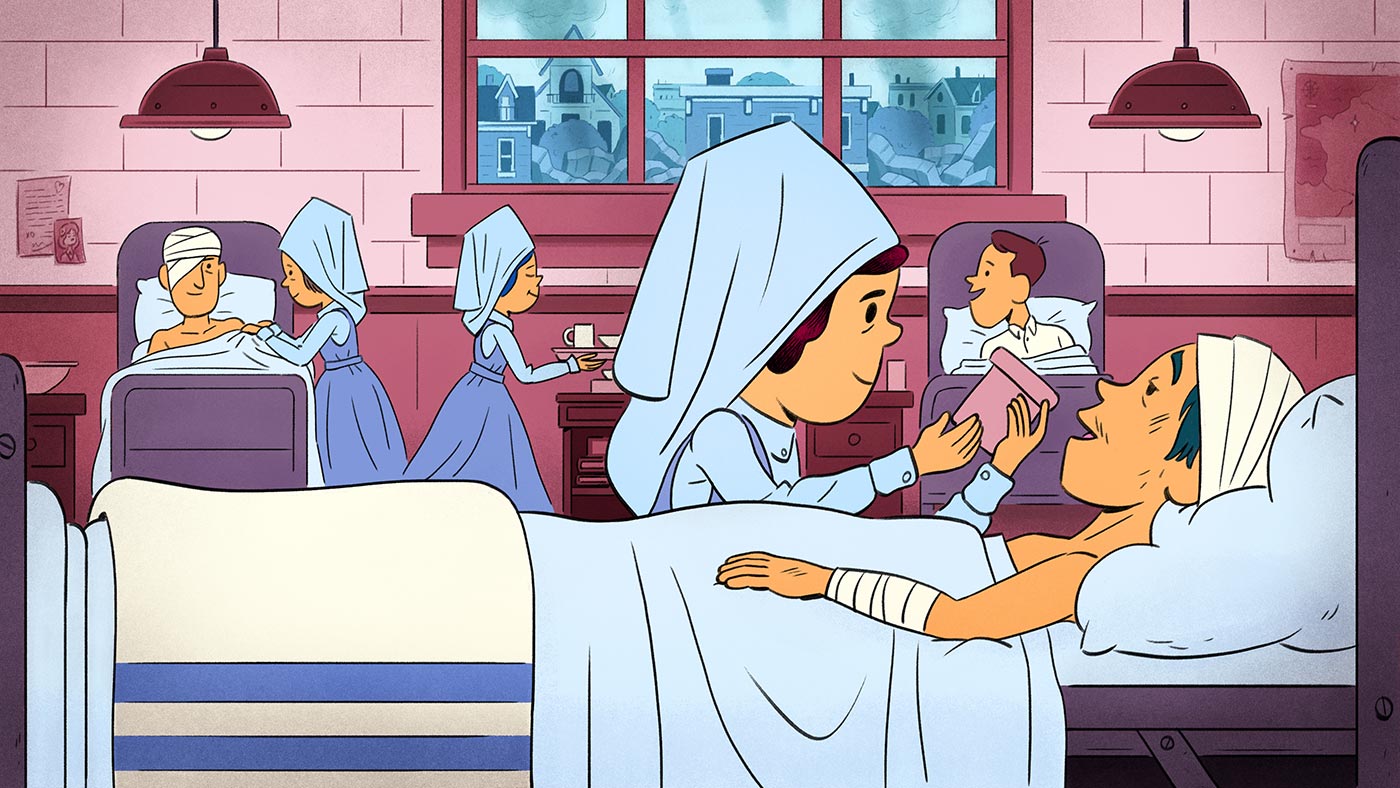 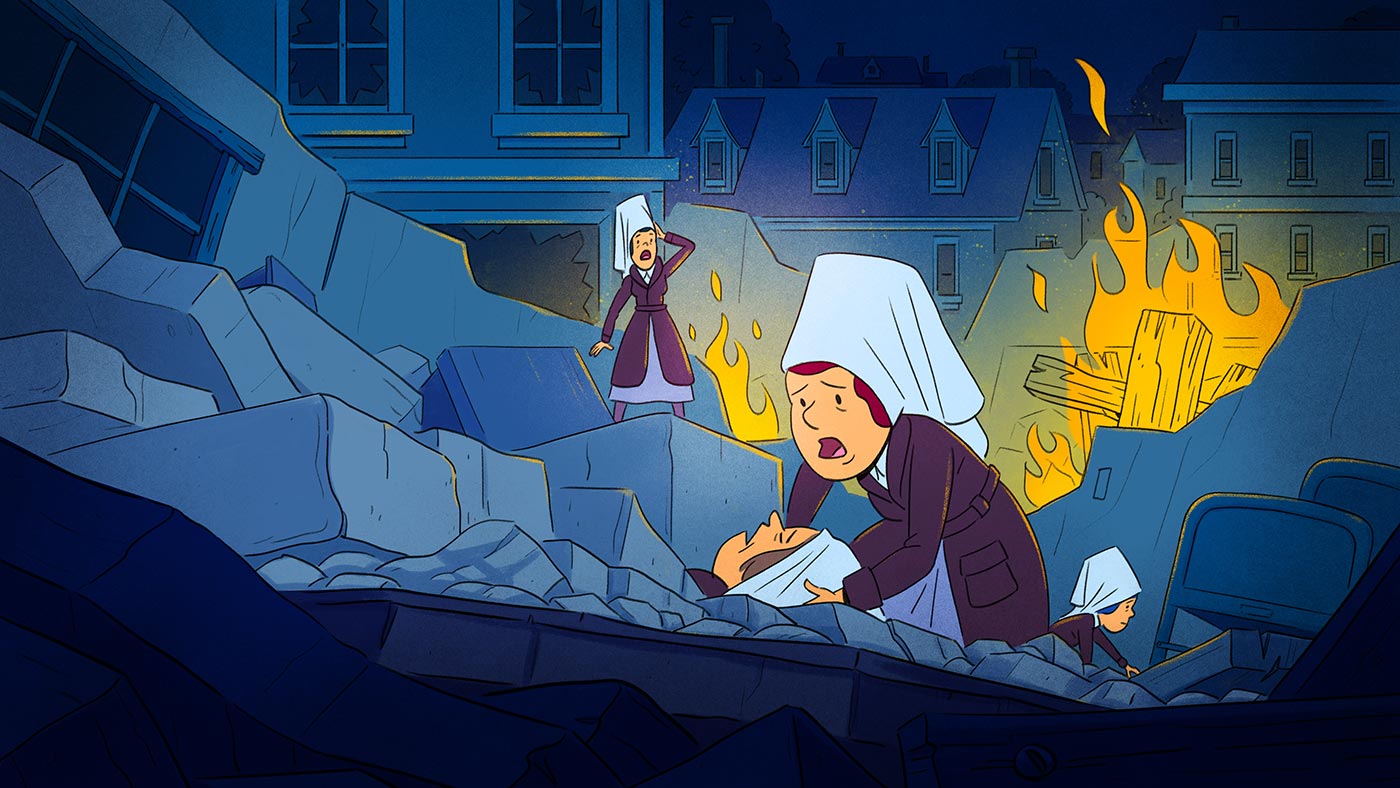 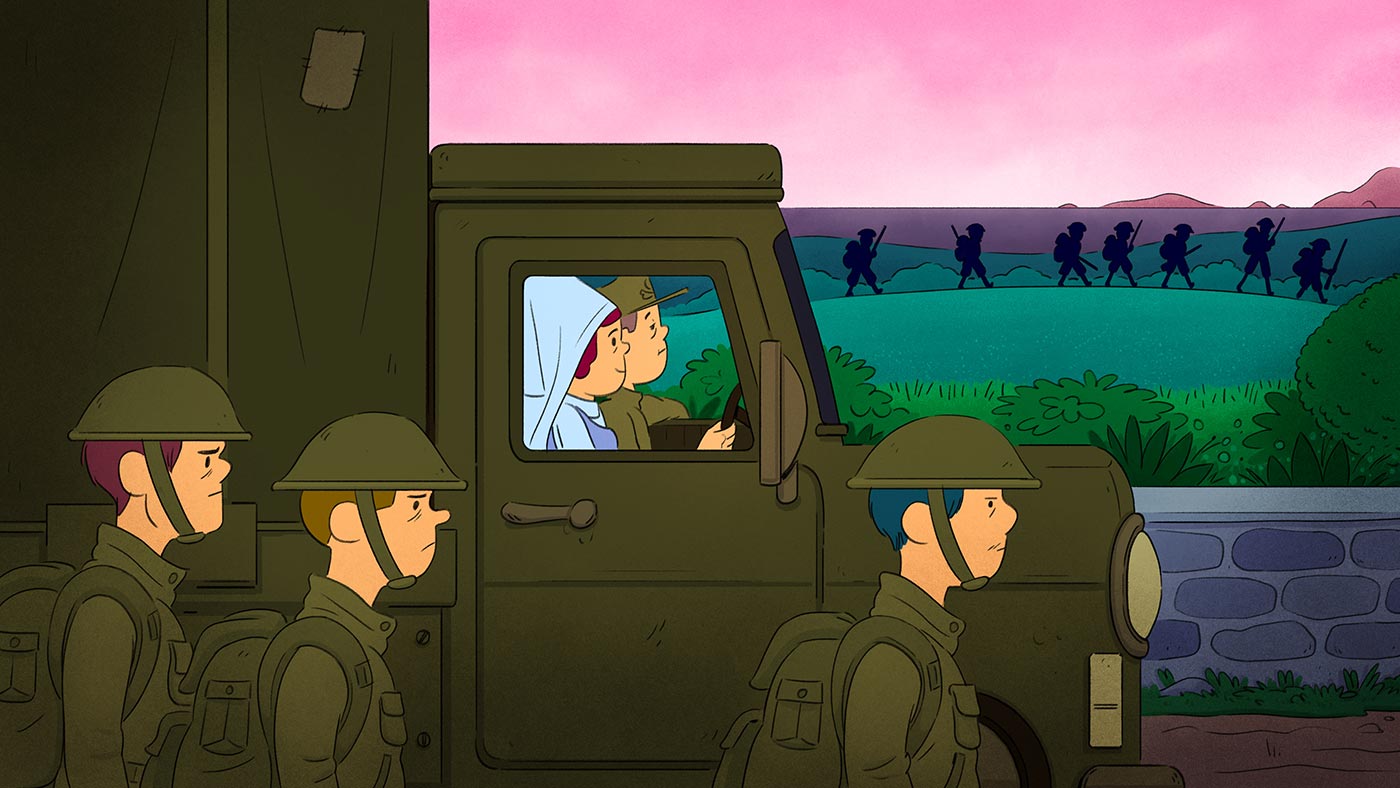 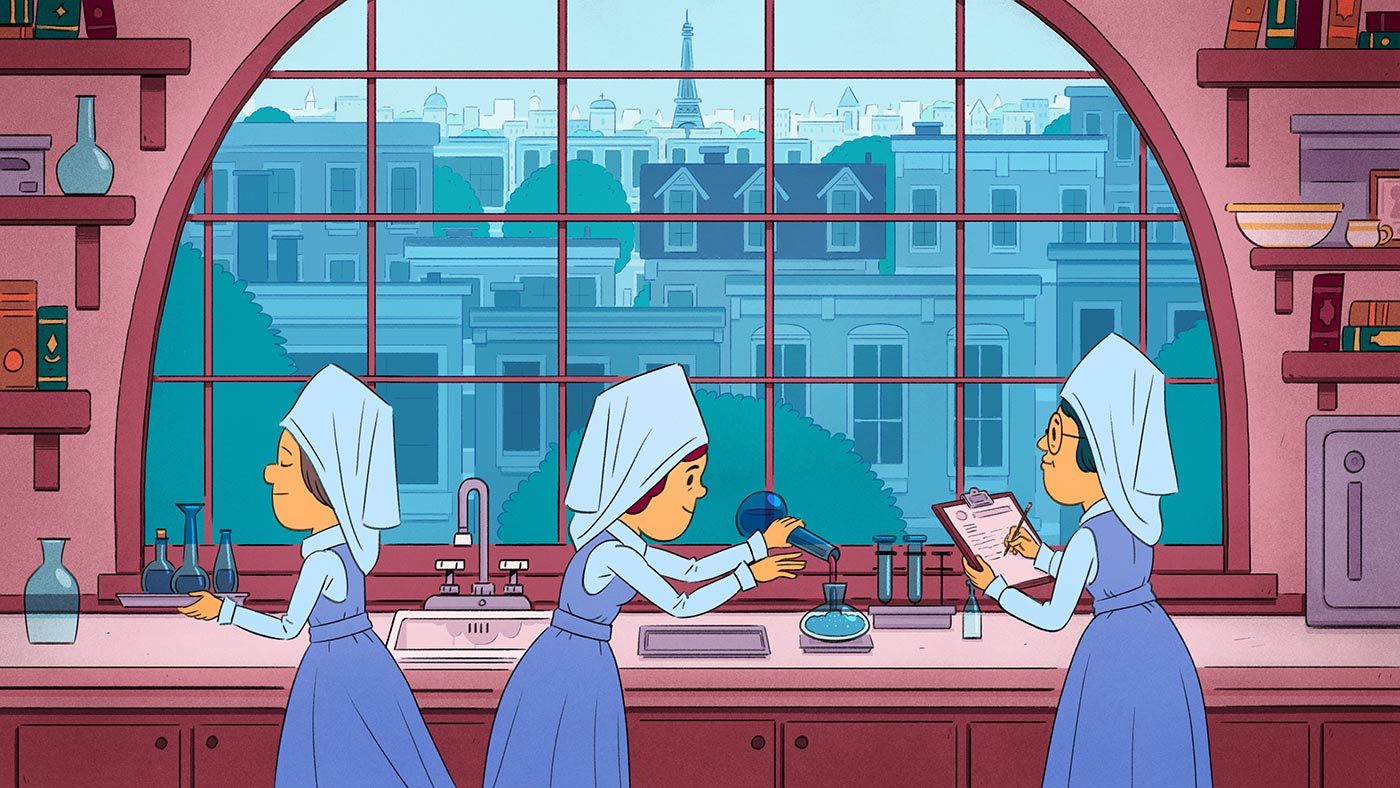 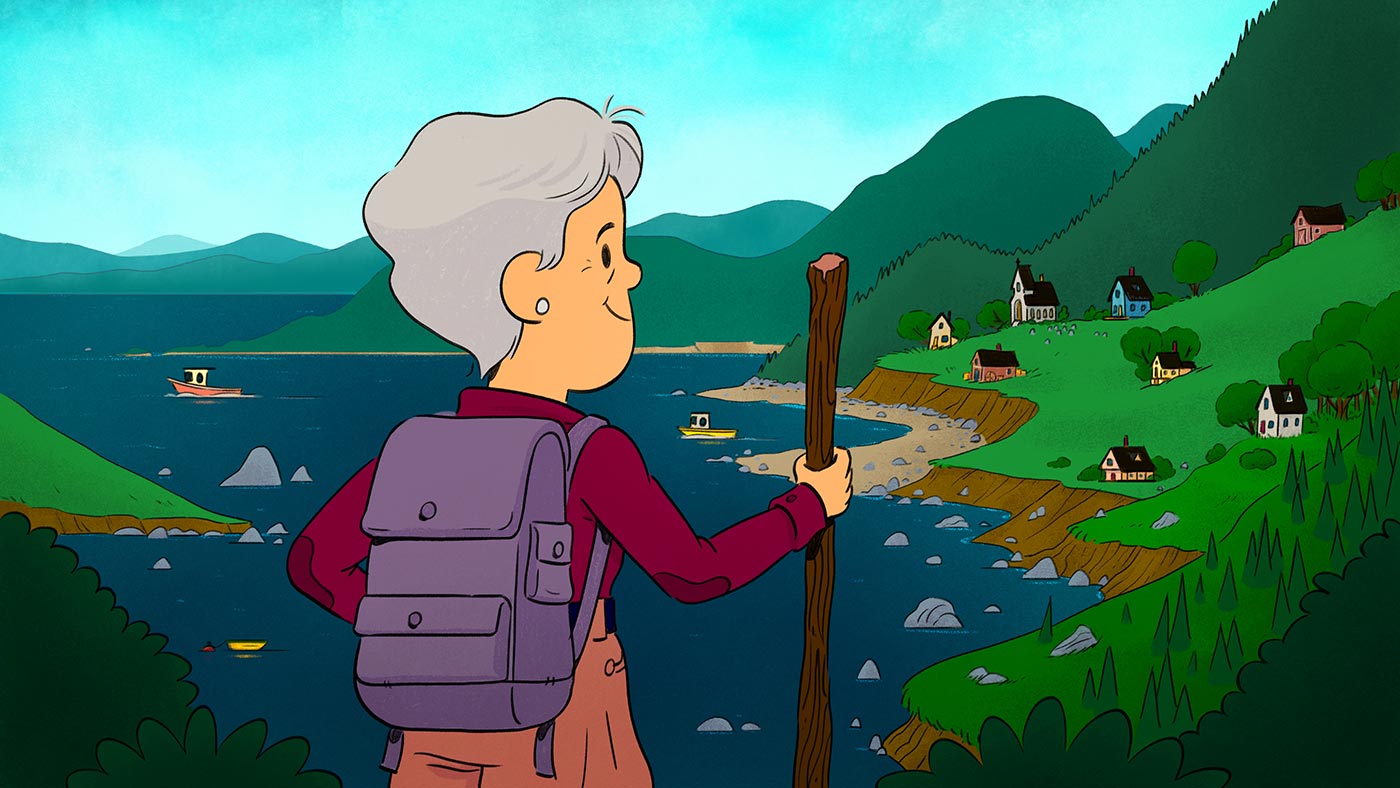 “I was an anaesthetist. I put people to sleep.”

Helen’s family played a key role in her decision to volunteer for service in the war. Her father, Dr. Henry Ernest Kendall, and uncle, Dr. Arthur Samuel Kendall, were well-known and respected physicians, who introduced Helen to the medical profession from an early age.

Her father went to England and France with No. 9 Canadian Stationary Hospital sponsored by St. Francis Xavier University, and was appointed the unit’s commanding officer in January 1917.

Her brother, Ernest James (Jim) Kendall, who had emigrated to Australia, served in the Australian army.

Helen’s close friend, Katharine McLennan, volunteered as a nursing aid in France in 1916, and Katharine’s brother Hugh was one of Cape Breton’s first casualties of the war, killed in action at Ypres, Belgium in 1915.

Listen to Helen Kendall describe her experience during the war in an interview with Ronald Caplan for Cape Breton's Magazine, ca. 1980.

HK: I hope that it’ll be worth listening to. I’m getting on. I’m 88 years old you know!

I: You were born and raised here in Cape Breton.

HK: In Sydney, oh absolutely. I’m a Sydney-ite, a Cape Bretoner, and I spent all my youthful life all around Cape Breton.

I: I want to know – why did you decide to train for a nurse? Why did you make that decision?

HK: Oh, I wanted to—I wanted to make some money, and be independent.

I: Do you remember why you chose to go over though?

HK: Oh, well, there was a great deal – the whole communities here, we were close to the war, and all our men went off… we were just going over where our men were. We wanted to go over there and to see them and to help them. I was an anesthetist. I put people to sleep. Because I had trained in Montreal. I belonged to the Royal Victoria Hospital, and they gave me my education there, and then I was very handy because, when you went overseas, there weren’t doctors available to give anesthetics. The doctors were too busy looking after them, and operating on them, and were very glad to have people giving anesthetics. And we were well trained, and we were valuable.

I: So you must have gone right over when you graduated because you were in France in 1917 I see here.

HK: Oh yes, we were in among it. We were right on the water. We looked across to England. The Canadians and the British built hospitals in France and then we went over and worked in them. The people who were fighting then were brought right down to our hospital, and we used to look after them. But they were the devil to give anesthetics to. They could fight like thieves! They were strong, and they weren’t going to be put upon, and we used to have two or three orderlies holding on to our patients while we were giving them the anesthetics to get them asleep.

I: I think it’s very exciting the work that you did during the war...

HK: Oh well of course it was, and we were lucky, lucky people to have that experience.

“We Nearly Did Not Get Here.”

On March 7, 1917, Helen and a reinforcement draft of 50 other nursing sisters sailed from Halifax, Nova Scotia to Liverpool, England aboard the S.S. Essequibo, a Canadian Pacific liner that served as a hospital ship during the war.

On March 15, at approximately 2:30 pm, the Essequibo was intercepted 100 nautical miles west of Ireland by U-54, a German submarine which surfaced and when the captain was satisfied that the ship was not

Carrying troops or munitions and was a legitimate hospital ship, he allowed it to continue on its way, much to the relief and surprise of the Canadians. It arrived safely at its destination the next day.

Well, we nearly did not get here – nearly, more nearly than I ever expect or hope to be again to departing this life. It was perfectly ghastly the whole affair. It happened on Thursday. Up to then we had had a good trip – racks on the table – some pretty sick – but most of us feeling all right.

The very day we struck the war zone, it happened to be perfectly calm, and up comes a German sub. I was asleep, but the slowing of the engines woke me. It was about 2.30 in the afternoon. Just after I woke Miss Cairns dashed down to my cabin and told me to “get up right off” which I did right off; put on everything warm I could get, and put a few things such as soap, tooth brush, powder, bed socks, and other necessities to take to the bottom of the sea with me into my leather case. It was quite the weirdest feeling looking hopelessly around and realising that it was useless to touch a thing, so up I came without my boots laced even and was just in time to see a good shot fall about 200 yards short of one side. After 3 signals we zigzagged stopped, and then they came up and stayed a good broadshot’s distance off. They hovered about for what seemed ages, and then said to send a boat over.

Our first officer rowed across and answered many questions, had he soldiers aboard? any civilians? Had we sent out any wireless for help? Had we seen a ship named Palasco? Having got “no” for every answer, they said we could go. We were close enough to hear their voices, and as the officers rowed back the suspense of waiting to hear our verdict was horrible.

The captain on our boat said, as did all the officers, that they did not for one minute think that we would be let off. They thought the captain and first engineer would be taken for hostages, and the rest of us put off in the boats and the ship sunk unless they just let us have one straight as we stood all on board. I think that is what most people expected every second.

After that she circled around us for a few times, and we thought they were changing their minds, but finally after an hour’s suspense left us. It was an experience and made us think all right. After that we had a day and a half but got along safely.

I forgot to mention that there was another sub, which appeared for a short time on the other side of us, when we were held up, but it did not bother us.